“Shout! The Mod Musical,” the jukebox tuner currently running at the Metropolis Performing Arts Center in Arlington Heights, is an innocuous bit of nostalgia.

Comprised of hits made famous by ’60s pop divas such as Petula Clark, Dusty Springfield and Lulu, “Shout!” follows five women as they navigate a turbulent era that saw their roles evolve and their opportunities expand thanks in no small part (as the show points out) to the invention of the birth control pill.

Created by Phillip George and David Lowenstein, with dialogue — described in the program as “mod musings” and “groovy gab” — by George and Peter Charles Morris, “Shout!” is a rather pedestrian, golden oldies revue that is sweet (in small doses), but ultimately unfulfilling.

The action unfolds on Rachel Seabaugh’s multilevel set, a cheery throwback to the fab scene of 1960s London, where the musical is set. It centers around five nameless, miniskirted women sporting bouffant hairdos and vinyl boots who are defined by stereotypes and the colors of their costumes.


Blue (Anna Seibert) is a posh, poised British bird. The adventurous, uninhibited Green (Ashlyn Seehafer) is a self-described tart. Embracing the role of wife and mother is Orange (Kelli Clevenger), the most traditional of the women. Red (played by understudy Marcela Ferrarone on opening night) is naive and a bit awkward. The lone American, Yellow (Carleigh Ray) is a sassy young woman obsessed with Paul McCartney.

The good news: Seibert and Ray are a couple of belters, evidenced by Seibert’s bouncy “Don’t Sleep in the Subway” and Ray’s sultry “Son of a Preacher Man.” The mashup of Monty Norman’s masterly “James Bond Theme” — cheekily performed — with the titular “Goldfinger” (with parody lyrics by George) is among the production’s highlights.

That said, the unifying device for this flimsy narrative is a fictional fashion/lifestyle magazine titled “Shout!,” which supplies fashion tips, celebrity gossip and relationship guidance. The latter comes courtesy of the unseen columnist Gwendolyn (voiced by Meg Elliott), whose singularly unhelpful responses to queries about love, sex and infidelity consist mostly of advising women to change hairstyles or get a pedicure. 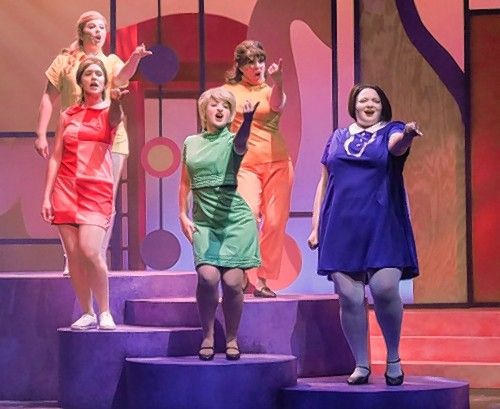 The characters are paper-thin. The dialogue consists of clunky puns and innuendo, accented with era-specific references to pop culture, pot and the pill. References near the end of the show to domestic violence and alcoholism are ill-conceived, halfhearted attempts to introduce gravitas to a show that is essentially a diversion, the theatrical equivalent of cotton candy.

Wonky lighting and misplaced spotlights plagued the opening-night performance of director Madison Smith’s revival, but her quintet is hardworking and enthusiastic, as evidenced by their efforts to rouse the mostly tepid audience with their zestful rendition of the Isley Brothers’ “Shout.” They’re accompanied onstage by keyboardist Kenneth McMullen, reed player David Albright, bassist Jeremy Montoto and drummer Nick Anderson.

Unfortunately, despite journeyman efforts by the cast and band, “Shout! The Mod Musical” doesn’t leave much to cheer about.

Running time: About 90 minutes, no intermission

Parking: Nearby garage and street parking