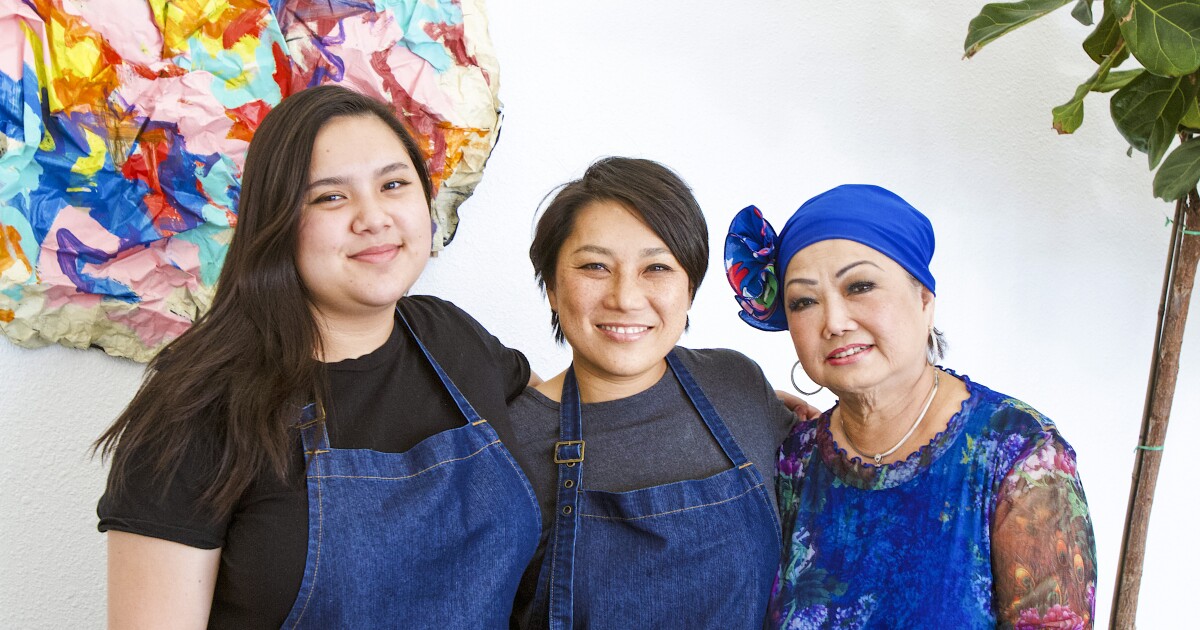 In a Long Beach strip mall, wedged between a laundromat and a pharmacy, three generations of Nguyen women fold flower-studded Vietnamese spring rolls that had, for a long while, disappeared from the space and nearly vanished for good.

The matriarch in the family line, Judy Mai Nguyen, does it all with a full, elegant face of makeup and a commanding presence, just as she has every day in her 35 years of working, off and on, to craft recipes, cook and manage in lauded restaurants such as Brodard and crustacean. Here, the women shred green papaya for a funky and bright beef jerky salad, and serve up vegetarian “duck” noodle soup that replicates the bird with swaths of braised bean curd skins. They slice carrots and cucumber for rotating bao specials, some filled with pork, others with soft-shell crab.

The casual Vietnamese-leaning restaurant is a testament to Nguyen’s cooking, and to her family’s tenacity in saving her restaurant space, which she closed during the pandemic. “I was sad to suddenly do that,” Nguyen said. “I almost gave up.”

With the help of her daughter and granddaughter she reopened roughly one year after closing the storefront, now humming from late morning into the afternoon. On Fridays and Saturdays her granddaughter de ella, Kiera Sivrican, joins her in the kitchen for prep, cooking and recipe creation, while Wednesdays to Saturdays the owner and operator of Sesame Dinetteperfumer-turned-restaurateur Linda Sivrican, can be found taking orders and curating the pantry goods, the pop-ups and the overseeing the general flow of the restaurant that helped save her mother’s business — and is offering a new generation of AAPI chefs and makers a place to shine.

Sivrican opened Sesame Dinette in April as a sibling concept to her Chinatown superette — Sesame LA — and a hail-mary to take over her mother’s own restaurant, which opened one month before the pandemic and closed just as quickly.

Nguyen had tried fulfilling catering orders for a time and even began preparing to-go food items for her daughter’s new corner store in Chinatown, but when the LA County Department of Public Health told the family they could no longer sell the perishable items at Sesame LA Sivrican saw the writing on the wall: Her mother would have to pivot.

She knew the commitment of her long-term Long Beach lease and the thousands of dollars her mother and stepfather had poured into their Retro Saigon Bistro, purchasing the kitchen equipment from the previous owners and investing in getting the operation up and running. In its short existence, it had provided income and activity not only for the Nguyens, but also for the matriarch’s friends from the local Buddhist temples, who worked there select days of the week.

“I thought that if I rebranded it under Sesame LA that at least some of the awareness could help,” Sivrican said. “I thought, ‘Why not, let’s just try it, let’s just do it.’ I’m totally confident with the skills in the kitchen; our main concern is how to manage front and back of house, and that led to the decisions of it being a very casual [format].”

She painted the mustard yellow walls a pristine, crisp white and modernized the decor. At one end of the dining room now sits a smattering of shelves, where jars of locally made black sesame spread and bottles of chile crisp and seasoned salts and other items made by members of the AAPI community serve as a sampling of the goods available at Sesame THE.

The restaurant’s streamlined menu runs from lunchtime to early evening, changing slightly each week with a focus on classic but creative Pan-Asian dishes, though many riff on Nguyen’s Vietnamese heritage and decades of professional experience with the cuisine. There’s no beer or wine license, and no table service — it’s all formulated to the comfort of its kitchen crew, composed primarily of Nguyen and her friends de ella from Truc Lam Buddhist Center and Chua Pho Linh temple, all in their 70s and 80s.

They arrive around 9 am to cook through lunch service, then leave around 4 pm, prepping for the following day of summer rolls and pho and banh mi before clocking out. All the while, a new generation of chefs, such as Kala’s Avanthi Dev and coffee roaster Dominic Lee Teece, take up a corner of the dining room.

A new space for AAPI entrepreneurs

Similarly to Sesame LA, the Dinette expands upon the 250-square-foot corner store’s ethos of supporting and uplifting AAPI makers. But in Long Beach, a residency program for up-and-coming chefs and other creatives carves out a space to experiment and showcase their food alongside the Sesame Dinette menu.

Kala, the first pop-up in the program, has given Dev — formerly of Destroyer and Vespertine — a place to sell whimsical, original and sustainability-minded pastries and deli-leaning savory dishes in the space. Instead of cheddar biscuits, she bakes fluffy versions with green garlic and paneer; classic French financiers get a cashew, almond and cardamom infusion to resemble barfi, an Indian sweet she loves. She repurposes whey from her fresh yogurt into a savory cream cheese frosting for her seasonal teacakes. She crafts tonics from her residual jam liquids.

Sesame Dinette is, for now, the only place to consistently find Dev’s cooking.

Opening both Sesame outposts hasn’t just been helpful to multiple generations of the chefs who’ve been showcased there; it’s helped Sivrican grow, too.

Being a perfumer, she said, was much lonelier than her newfound trade as a restaurateur. Though she operates Capsule Parfumerie with her husband, Mike, much of her creative process is spent alone.

“I used to joke around the first month that I opened Sesame [LA], I talked to more people than I did in the last 10 years being a perfumer. There’s so many people that come through; I met so many good friends, new friends — being in my late 40s, to be able to make really meaningful friendships because of Sesame LA, I’m so grateful for that..”

She hopes she can continue to build that community in Long Beach through pop-ups and special dinners, and by curating the restaurant’s pantry goods to suit the needs of the area’s ample Cambodian population. While growing community, she’s also growing her family closer. Even her stepfather de ella is joining the fray. His role as the Dinette’s resident handyman has turned into occasional baker, as he’s spent more time in the kitchen and learned to make bread and donuts for fun.

“I feel very happy,” Judy Mai Nguyen said. “That’s why I wake up and go back to the career I like. [Sivrican] is very, very creative, too, and she’s a very busy and hard worker; I can’t believe it. When I was young, I worked a lot but I was not like zip here, zip there. To do that is not easy.”

Once, when asked for her opinion on one of her mom’s dishes, Sivrican took a taste and said, “OK, it’s good but it’s a little sweet,” Before her mom even tried it herself, she retort “That’s your mouth.” (Others then tried it and echoed Sivrican’s sentiments from her, at which point Nguyen conceded it was, perhaps, a little sweet.)

But Sivrican is learning more and more, and so is her daughter. Seeing the three together move in and out of the space with ease and love, it’s hard to imagine a better chef-mentor for all of them.